Skip to content
HomeBangladesh Dental Society calls for amalgam phase out in the treatment of children, pregnant women, and nursing mothers by June 2018 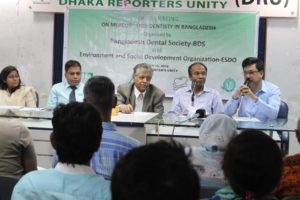 The Environment and Social Development Organization (ESDO) in association with Bangladesh Dental Society (BDS) organized a press briefing on March 10, 2018, where BDS declared “Mercury dental amalgam should not be used in the treatment of pregnant women, nursing mother and children after June, 2018.”

BDS Secretary General Dr. Humayun Kabir Bulbul officially announced this decision, saying “Since Minamata Convention has already entered into force and be an international law, Bangladesh ought to phase out mercury added products by 2020 as a signatory of the convention.” Dr. Kabir said, if a childbearing woman or breastfeeding mother has amalgam fillings in her teeth, the fetus will be exposed to mercury released from the filling throughout the gestation period as it passes via placenta into the fetus. This is very damaging to neurological development because the fetus doesn’t have a well-developed and effective blood brain barrier. Mercury also passes into breast milk and can affect the nursing baby.

“I am hopeful that since Bangladesh is a signatory country of Minamata Convention, government will pay much attention to introduce regulations to stop mercury amalgam in dental treatment,” said Syed Marghub Murshed, Former Secretary, Government of the People’s Republic of Bangladesh and Chairperson of ESDO in this press briefing.

Dr. Md. Abul Kashem, president of BDS said, “Mercury threatens not only our lives but also our environment. While many countries have already disallowed mercury amalgam, we, the people of Bangladesh, are far behind. For protecting our future, the use of mercury in dental treatment has to be outlawed right now.”

“Today’s declaration of BDS signifies a way forward towards phasing out dental amalgam for the treatment of the most vulnerable groups. A concrete regulation from the government alongside is an urge for the early ratification of the convention,” said Dr. Shahriar Hossain, Executive Vice President of World Alliance.

“In 2013 Bangladesh signed the Minamata Convention, the global treaty to phase out all sorts of mercury uses to protect human health and environment from its detrimental effects. On that account this declaration will be an effective move towards supporting the convention,” said Siddika Sultana, Executive Director, ESDO.

As Bangladesh is a signatory country of the Minamata Convention, BDS together with ESDO made a call to the dental surgeons of Bangladesh to put an end to the use of mercury amalgam in the treatment of pregnant women, nursing mothers, and children in June, 2018. In accordance with that, they urged to the government to officially prohibit the use and export of mercury and mercury-containing products.